There was a good turnout for the AGM on Tuesday evening which was good for democracy but also benefited the RNLI and the Club via gift, bar and merchandise sales.

Phil Warwick delivered his sixth and final report as Commodore. He said farewell to Claudia Guidetti who was stepping down after serving as Honorary Treasurer for eight years. This was a demanding yet crucial role at which Claudia had excelled. At the last AGM, David Grout had stood down as Membership Secretary and Chief Instructor. Soon he and Claudia would be embarking upon an exciting new adventure in Italy. On behalf of the members, Phil thanked Claudia and David for their tremendous contributions to the Club and presented them with a gift. 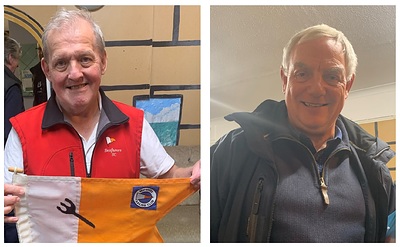 Later in the AGM, Joe Kennedy was elected as the new Honorary Treasurer and Bill Cunningham was elected to supercede Phil as Commodore. Phil presented Bill with the Commodore's pennant. On behalf of the members, Bill then thanked Phil for his six years service as Commodore of Seafarers Sailing Club. Phil had been an exemplary leader of, and friendly colleague to, all members. The Club had been especially fortunate to have such an experienced pair of hands to guide it through the challenges of the last two seasons.

Draft minutes of the 2021 AGM should be available by the end of the year. The documentation provided for the meeting including the Ten Year Plan can be found at CLUB/Club Documents/2021 AGM Documents (here).