Within the Club membership there have always been those who owned yachts and/or were experienced yacht sailors. Toward the end of the 1990s, a couple of those with experience encouraged a few Club colleagues to join them on a flotilla holiday. In May 1998, ten Club members spent two weeks in the Ionian sailing 3 Beneteau 32s from Corfu to Lefkas.

The flotilla company was "Sailing Holidays" which began life in 1976 as Flotilla Sailing Club. In 1987 the name was changed to Sailing Holidays Ltd and it began running flotillas with eleven Jaguar 27 yachts. Barrie Neilson, who joined in 1979 as a flotilla engineer, now owns and runs the company which has 178 yachts in Greece. John Glover, one of the experienced members of the 1998 Seafarers group, summarised Sailing Holidays approach in his description of the briefing given to all flotilla crews on day 1; "Funnily enough, nobody ever enquired about our sailing experience or gave any instruction on reefing etc". This may sound cavalier, but the system was ideal for Seafarers; many in the group would be experienced dinghy sailors, some would be experienced yacht sailors (from previous flotillas or otherwise) and the company's lead crew were always there, or a VHF call away, when needed.

Over the next four years, a subset of the initial group joined Sailing Holidays flotillas each May; in 1969 in Greece and from 2000 to 2002 in Croatia. 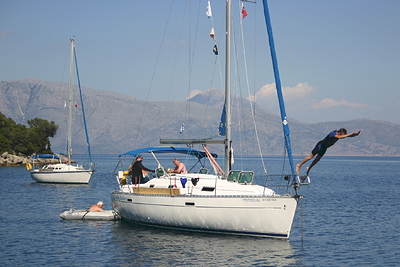 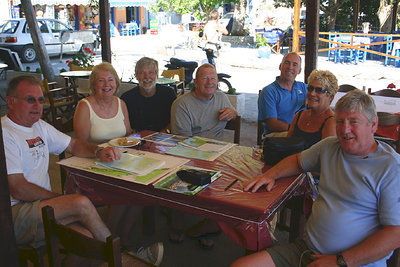 Frustrated that, as a teacher, he could not escape in May, Mike Burlingham took early retirement and organised a flotilla holiday for 2007. A total of 9 Club members, 5 for 2 weeks and 4 for 1 week, joined Sailing Holidays flotillas sailing 2 GibSea 29s and a Beneteau 331 from Corfu to Lefkas. In June, a Tuesday evening was devoted to a briefing on the flotilla experience. This generated lots of enthusiasm. The following year, 2008, a total of 37 Club members, 16 for 2 weeks, 21 for 1, joined Sailing Holidays flotillas sailing a total of 10 boats (Beneteau 305s, 331s and 361s and Feeling 960s) from Corfu to Lefkas.

There has been a Seafarers crewed boat in a flotilla every year since 2007. In 2010, 20 members crewed 10 yachts from Lefkas, via the Gulf of Corinth and the Corinth Canal, into the Saronic Gulf. By 2012, October had become more popular than May and Neilson had become the flotilla company of choice.

Neilson, formed in 1994, was originally the activity holidays arm of Thomas Cook. In 2013 Cooks sold Neilson to a private equity firm. Thus Brighton based Neilson Active Holidays was unaffected when Thomas Cook collapsed in September 2019. Barry Neilson of Sailing Holidays has little love for this competitor. He has claimed that their choice of trading name, Neilson, was to confuse Sailing Holidays' customers. Neilson's early flotilla holday brochures were always titled "Sailing Holidays"!

A plan for 32 members to sail around the Greek islands for a week in October 2020 in 12 yachts with Sailing Holidays had to be postponed because of the Coronavirus pandemic. All are hopeful that they will get away in October 2021.

Reports exist for most of the flotilla holidays identifying, for example, who went and the places they visited. These reports can be accessed via the side menu (smartphone users select "more"). You have to be Logged in for this to be visible.

Photographs of most of the flotilla holidays will be found in the Gallery Archive (here). You will find them in the folder for the appropriate year eg for May 2007 flotilla, look in 2007 folder.