Keeping members informed has never been straightforward. At the 1978 AGM it was mentioned that there had been problems communicating with members particularly "out of town members". The Advertiser was suggested as a way of communicating with local members. In 1982 it was proposed that members provide s.a.e. for better circulation of newsletters etc. Using the Advertiser as a vehicle for Club information would not have been novel. Every month or two from his founding of the Club in 1961 until his departure to Canada in 1964, John Harmer published a 'Seafarers Club' report in the Advertiser.

A newsletter for Seafarers Sailing Club has been produced, on and off, since 1984. The content and frequency has varied considerably. Simon Hunt (of Islington, London) joined the Seafarers Management Committee at the end of 1983 as Publicity Officer. During 1984 he produced two 12-page editions of a Club Magazine; the Spring edition being Vol. 1 No. 1, the Summer edition Vol. 1 No.2. A third edition was promised for Christmas. During the rest of the 80s and early 90s the norm was two 'Commodore's Newsletters' or 'Newsletters' per year.

Issue 1 of "SSC News" was published in December 1994, edited by Peter Butterworth and published, at least initially, bi-annually. Peter, an ex-Commodore, left the Club in 1997 and David Taylor, then recently retired as Membership Secretary, stepped in to edit editions 10 (July 97) to 16 (Oct 99). Martin Rance became editor in 2000 and oversaw the production of 35 editions of "SSC News" eventually handing over to our current editor, Clive Dakin after the Spring 2018 edition. 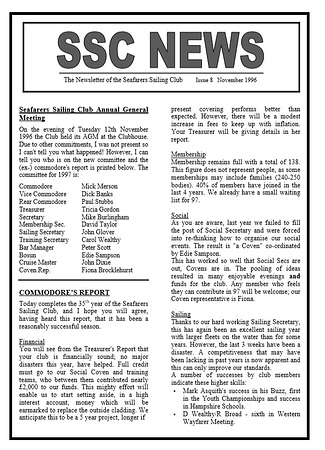 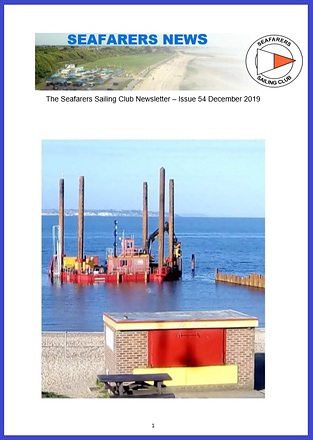 The Club first appeared in cyberspace in January 2004 when our first webmaster, Neil Suffield, made our website 'live'. Kerry Stares took over in 2005 and added a number of features including race results, cruise reports and a picture gallery. He also introduced a forum to enable members to exchange views on Club matters. Noting the popularity of the gallery, the following year the Club purchased a waterproof camera that could be used from the safety boat. It could also be used ashore to record social functions for posterity.

At the 2018 AGM, approval was granted for the purchase of the IT system 'DutyMan'. The benefits hoped for included raising the awareness of members to sailing and social programmes and, more importantly, improving attendance rates for duties. The Membership Secretary put a lot of time and effort into Dutyman. However, he came to realise that, while the program could deliver against the duty aspect, it was less optimal in terms of its calendar and how it interacted with the website. Further research of available software identified a product called 'Sailing Club Manager'. Although this cost more, it provided the functions required from Dutyman plus an opportunity to upgrade our website.

Miraculously the Sailing Club Manager website was up and running by February 2019 with the duty roster element operational in time for the new racing season. A significant advantage over the Club's previous website is that the new website offers "Members-only" areas. Nevertheless, most of the website is open to the public. In addition to the duty roster, the new website provides members with other useful facilities such as a flexible Programme /Calendar and a crew finder. The website does not hold the membership database; we use WebCollect for that (see Part 5).

With its members-only facility, the new website provides a home for the Club Archives. Members now have online access to, for example, racing results since 2005, newsletters since 1984, prize winners since 1970, and photographs and the minutes of general meetings since 1961.

In March 2020, Forums were added to the website offering a bulletin board facility allowing member-to-members posts. This has remained unused ever since; chatty members prefer to use Facebook (see below). 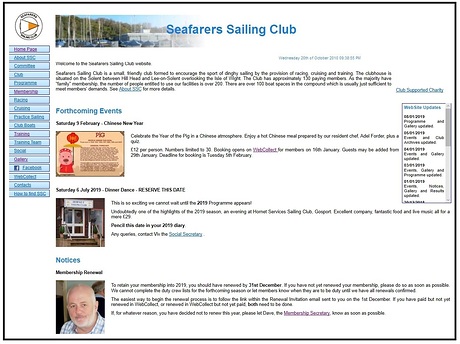 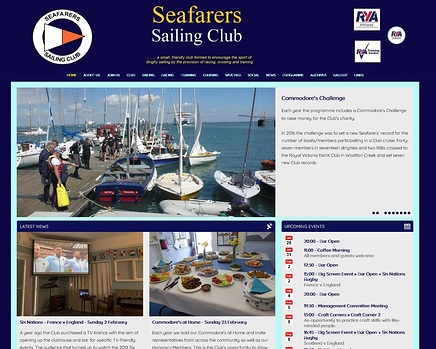 In December 2009, Debbie Woolnough, a Facebook aficionado, set up a Seafarers Sailing Club Facebook Group. The group is "closed" which means that any member of Facebook can find the Group and request to join. However, only members of the Group can see the list of members and read what other members of the Group have posted. The Group now has two Admins and Moderators, Debbie and Tim Mason (Membership Secretary). Requests to join the Group have to be approved by one of them. At the time of writing (December 2020), the Group has 134 members. The Admins also ensure that only material related to Seafarers Sailing Club is posted.